The Slow-Cooked Texas Chicken I made was enough chicken to make two meals so I thought I would share with you the two simple dinners I made using the meat.

The first night we had sandwiches and french fries: 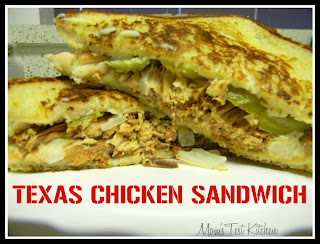 For the sandwich, I simply buttered and toasted two pieces of bread in a skillet, added the shredded chicken, some chopped sweet onion, pickles and a little bit of mayo.

The second night I made a BBQ Pizza: 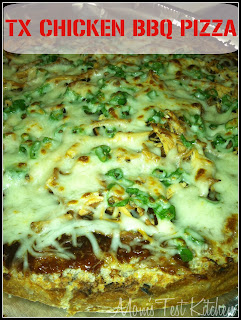 For the pizza, I used a round loaf of bread that I found on special in my grocery store’s bakery, topped it with a good amount of bottled honey BBQ sauce, the chicken, some chopped green onions and mozzarella cheese.  Put it on a baking sheet and broiled it in the oven just long enough to get warm and for the cheese to melt.  I did warm the chicken in the microwave prior to putting it on the pizza.

I’ve seen a few spicy pasta dishes that I think this chicken would also be good in.  Next time I make it, I’ll try those and be sure to let you know how they turn out!