Two things for this dish:

First: I had no idea how this dish was going to turn out.  I did not realize that the pork chops would fall apart as they cooked and that the soup would turn into a gravy.  I would have served this over mashed potatoes or maybe rice if I had.  Oh well, next time.

Second: I felt like it was a very salty dish.  The Hubs said it was fine but to me it was salty.  I would use low sodium soup instead.  Again, next time. 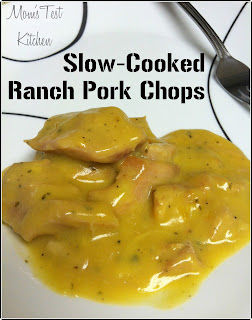 LETS COOK:
It really doesn’t get much simpler than this ~ combine all of the ingredients in your crockpot and cook on low for 8-9 hours.  Cook for less time if you want your pork chops to stay whole 🙂