When I first saw this dish on Pinterest, I knew I wanted to try it.  I love roasted potatoes.  I’m the crazy person that will pick a recipe for dinner that requires roasting potatoes when it’s over 100 degrees outside.  I’m also the same crazy person that will start complaining and asking why its so damn hot in the house 🙂
The dish was very easy to put together so that’s always a bonus in my book but the Hubs and I both felt that the chicken was very bland, extremely juicy, but bland.  The carrots & potatoes were magnificent though!
If I decided to make this recipe again I think I would increase the amount of oregano and use a second orange or possibly a lemon.  If anyone has tried or does try the recipe and makes some changes, I would love to hear about them! 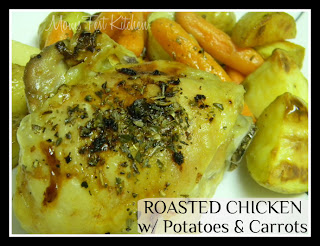 LETS COOK:
1. Preheat the oven to 400 degrees.  Line a large baking sheet with aluminum foil.
2. Pour 2 tablespoons of the olive oil onto the baking sheet and gently move to spread the oil out.  Rub the skin of the chicken thighs in the oil, then turn them skin side up.
3. In a large bowl, toss the potatoes in 1 tablespoon olive oil until well coated.  Spread the potatoes out around the chicken on the baking sheet.*
4. In the same bowl, toss the carrots in the remaining 1 tablespoon olive oil until well coated.  Mix the carrots in with the potatoes around the chicken.*
5. Sprinkle the onion and oregano over the chicken and vegetables.  Zest the orange and sprinkle over the chicken, reserving the juice.  Season the entire pan with salt and pepper.
6. Bake for 30 minutes.  Remove the pan and squeeze the juice from the orange over the chicken.  Bake for an additional 20 minutes or until the chicken is no longer pink and the juices run clear.

NOTES:
*You could combine steps 3 & 4 into one step – just put the carrots and potatoes and 2 tablespoons of oil into one really big bowl and then dump out onto the baking sheet – I just don’t have a bowl big enough to hold all of that so I wrote it out as 2 separate steps

RECIPE INSPIRED BY: Life Is Great

Anyone else crazy enough to admit to summer time roasting?? 😉