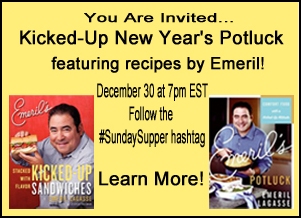 We’re kicking off the New Year with a Potluck Party with non other than the beloved Emeril!!  Twenty-Five Sunday Supper Contributors have gotten the privilege to share some of our favorite recipes from two of Emeril’s cookbooks ~ Emeril’s Potluck: Comfort Food with a Kicked-Up Attitude 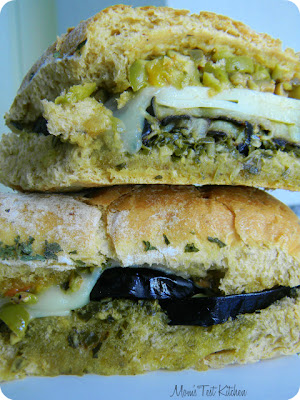 Cookbook & I immediately began reading through the recipes!  There are so many new sandwich recipes in there that I can not wait to try! 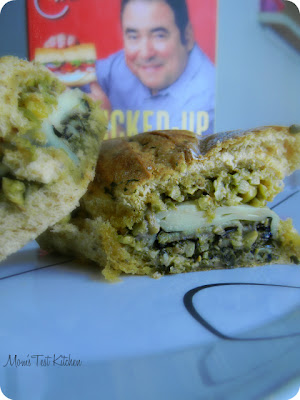 For this party though, since it’s New Years & we all want to start the year off healthy, I just had to pick one of Emeril’s hearty meatless sandwiches!  I absolutely love eggplant & was so thrilled to see his twist on the classic Muffuletta sandwich.
This sandwich definitely did not disappoint!  It’s not your classic Muffuletta but it’s so good!  We never missed the meat! 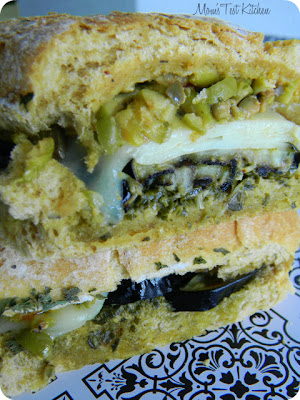 INGREDIENTS:
LETS COOK:
1. Position an oven rack as close to the broiler unit as possible, and preheat the broiler.
2. Arrange the eggplant slices in a single layer on two lightly greased baking sheets. Using a pastry brush, lightly brush both sides of the slices with the olive oil. Season both sides with the salt and pepper. Broil the eggplant, in batches, until the slices are tender and lightly browned and have released most of their moisture, 10 to 12 minutes. Remove from the oven and keep warm.
3. Reduce the oven temperature to 350°F and move the oven rack to the center position.
4. When you are ready to assemble the sandwiches, slice the loaf of bread in half horizontally. Using a pastry brush, spread the bottom half with a generous amount of Basil Spread.
5. Spread the olive salad (with its olive oil—do not strain) over the top half of the loaf. Layer the sliced mozzarella and provolone on top of the olive salad, and then layer the slices of eggplant. Place the bottom half of the sandwich on top and lightly press. Quickly and carefully turn the loaf over so that the olive salad side is on top.
6. Place the muffuletta on a baking sheet lined with parchment paper, and bake until the cheese has melted, the muffuletta is heated through, and the bread is slightly crisp, about 12 minutes.
7. Remove the baking sheet from the oven and carefully transfer the loaf to a cutting board. Press lightly, and cut the loaf into 4 sections. Serve immediately.
Recipe courtesy Emeril Lagasse, Emeril’s Kicked-up Sandwiches, William Morrow Publishers, New York, 2012
NOTES:
*I made a few adaptations to Emeril’s original sandwich based on what was available at my store: when I went shopping, my grocery store was out of provolone cheese so I simply used all mozzarella slices for the sandwiches.  I also used a pre-made Olive Bruschetta in place of his New Orleans Style Olive Salad & used Tomato bread rather than the Italian seeded ~ that was simply taste preference 🙂
Now for the party!!
First, I get the opportunity to give away a copy of one of Emeril’s two cookbooks ~ Emeril’s Potluck or Kicked-Up Sandwiches ~ to one lucky reader!!  The winner will randomly be chosen tonight during the #SundaySupper live twitter chat!  Simply follow the #SundaySupper hashtag!

To Enter: Simply send me a tweet with your favorite Emeril recipe and/or New Year’s recipe! Be sure to include my Twitter handle @MomsTestKitche1 & the #SundaySupper hastag in your tweet!!  Then join us for the #SundaySupper twitter chat at 7 pm EST!

The Giveaway will end tonight at 8 pm EST & the winner will be chosen via random.org.  Giveaway is open to US & Canada residents only.

Join the #SundaySupper conversation on twitter each Sunday. We tweet throughout the day and share recipes from all over the world. Our weekly chat starts at 7:00 pm ET and you do not want to miss out on the fun. Follow the #SundaySupper hashtag and remember to include it in your tweets to join in the chat. Check out our #SundaySupper Pinterest board for more fabulous recipes and food photos.