Hello there!  Welcome to my guest post on Moms Test Kitchen! Who am I, you ask? Well, I’m Christie and I blog over at A Kitchen Hoor.  I try to create healthy-ish recipes that are tasty and low in fat.  Like this one!!

For this year, there were 4 Holiday events at work.  Three of which, I baked treats to bring to the party.  Yes.  I was a busy baker this year, thank you for asking.  Last year, things weren’t NEARLY as busy for me in the kitchen.  BUT this year, I volunteered to represent our department in the division party planning.  For those that don’t know, they call me hermit at work.  So, for me to volunteer to be social was a HUGE deal. 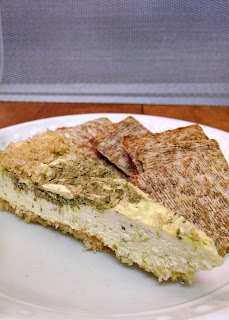 In the past, this has been a few home baked goods and some “baked” items from the freezer section at Costco.  Not this year. There were a BUNCH of home made food and even some home made drinks at this party.  I wanted to bring an appetizer & I wanted to bring something different for that appetizer.  I’ve been toying with the idea of a making a savory cheesecake for a while now.  I thought, “This would be a perfect opportunity to give it a shot!”  So, I did. 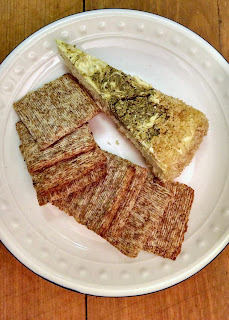 I did some online research to try to get some ratios going, then tried to incorporate those ratios in with the low fat diet S and I have been trying to maintain.  This part was easy minus the goat cheese.  I don’t know about you, but I LOVE LOVE LOVE goat cheese!  It’s tangy creaminess is crack on a cracker.  To me at least.  Then I thought, “Wouldn’t it be interesting to have a swirl on top?  But what kind of swirl…”  Hm…  PESTO!  Brilliant!  I’ll make it an Italian style savory cheese with some rosemary in the batter and swirled with pesto on top.  BRILLIANT!  A swirled, savory cheesecake!!

I had to beat S off with a stick to keep from eating it.  It looked and smelled amazing!!  I threw it in the fridge for a few days before schlepping it to work with the breakfast cookies I made for the secret Santa gift swap.  Can I just say, I don’t really like being bag lady.  That was too much to handle.  Even though we drive to work, it wasn’t all that easy getting it all up the elevator and into my office.  There’s doors to badge in to which is not easy when your hands are full. 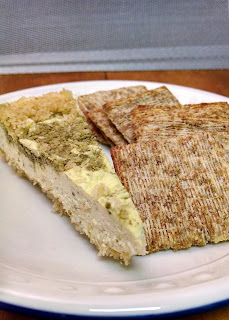 I even brought in a pretty plate to serve it on and some crackers.  Thankfully, they were rosemary Triscuits that Dad had given me a few weeks ago.  You see!  I knew I’d find a reason to use those buggers!!  Since I was UBER busy, I didn’t get a chance to attend the party for very long.  So, I asked J to save me a piece so I could photograph it and have some.  Lucky that I did, because about 40 minutes or so later, she said she snagged a small piece for me and put it in the fridge in our office.  Little did I know, that it would be such a hit!!  There was a TON of food there, but mine almost vanished and WOULD have had I not asked for J to save me a piece.

So, a hundred or so co-workers can’t be wrong.  This is mighty tasty and uniquely perfect appetizer to bring to any party.  Say, a New Year’s Party?  Hmm?  It’s quick and easy to throw together and just tastes amazing!

Recipe by A Kitchen Hoor (@flowerfroggirl) 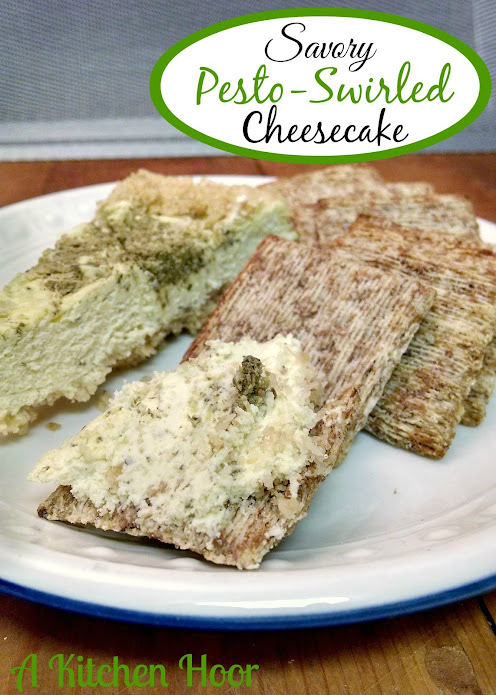